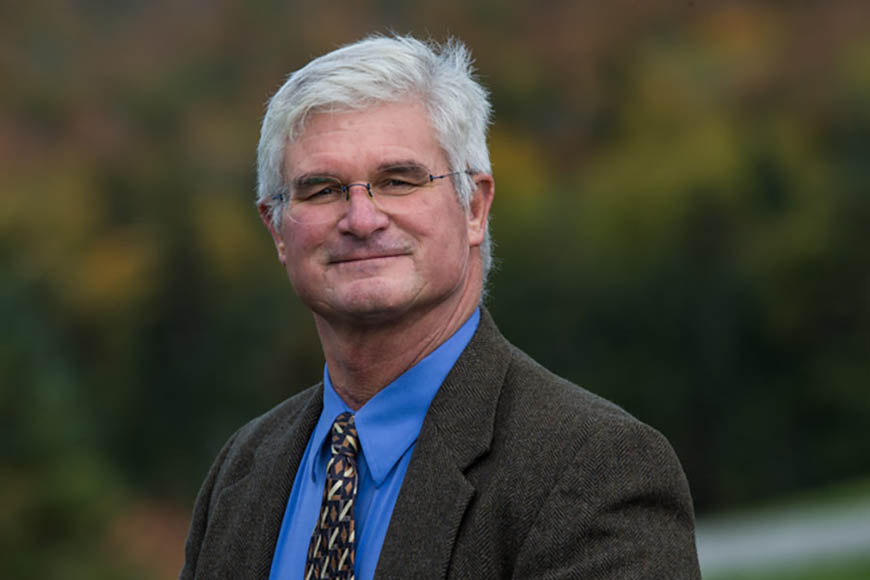 Please join us in extending our warmest wishes to Director of Facilities and Sustainability John Culpepper, who after more than 30 years of dedicated and passionate service, will formally retire from North Country School and Camp Treetops on December 3, 2021.

A stalwart leader, John exemplifies our institutional values with his resourcefulness, endless curiosity, and deep commitment to innovative thinking and place-based learning. He has brought an unparalleled breadth and depth of knowledge and a level of passion and tirelessness to his work preserving, renewing and developing our campus. His efforts to increase campus sustainability and lower our carbon footprint will continue to bear fruit for decades.

John holds a BS in ornamental horticulture and landscape design, an MS in plant science and molecular genetics, and a PhD, ABD in plant science from Cornell University. Over the years, John has represented Camp Treetops and North Country School through wide-ranging partnerships with like-minded public and private organizations such as The Wild Center, Adirondack North Country Association (ANCA), Cloudsplitter Foundation, The New York State Energy Research and Development Authority (NYSERDA), and US Composting Council. John has also presented on the institution’s sustainability initiatives at numerous international, regional, and local conferences and workshops.

John began his tenure at Camp and School in 1990 as our first year-round garden manager, arriving on campus with his wife, Karen, and their three young children, Kelli, Katie, and Tucker. In this position John modernized the farm, bringing in contemporary horticultural practices, established the first greenhouse, and developed an early irrigation system for all growing spaces. From 1994 through 2004, John worked summers only and was a “special projects coordinator” rebuilding Raspberry Knoll lean-to, the Butterfly House, the Uphill and Downhill Grills/Cabana, along with other projects. In 2004, John became the farm manager, a position that he held for 18 months, at which point he moved into his current position.

As the director of facilities and sustainability, John oversaw well over 10 million dollars in new construction and renovation, including but not limited to: construction of the wastewater treatment plant; the renovation of several sections of the Main Building; construction of Clark House; the reorganization of the campus core; the burial of all overhead power and communication lines; upgrading the potable water systems; replacing miles of underground infrastructure; renovation of Weecote Cottage and Barn; bringing Rock-E House up to commercial code; construction of the Teaching and Learning Kitchen; construction of the Walter Breeman Performing Arts Center (WallyPAC); the Hansen House renovation; and the renovation of the CTT Main House. John also oversaw the construction of numerous innovative seasonal buildings, including the Hanging House, Wing House, and three with living roofs. Alongside these major projects John has championed numerous sustainability initiatives, largely funded through various grants that he applied for. To date, those grant awards total over $750,000. The initiatives funded primarily through these grants, include: eliminating all fuel oil use on campus—replacing those boilers with high efficiency wood boilers; initiating a sustainable forestry program, grounded in professionally developed forest management plans; the buildout of over 20,000 Watts of solar PV panels in three locations; the buildout of solar thermal hot water systems in two places; the development in implementation of a novel in-vessel composting system; and the development of miles of recreational trails on campus.

In the words of our Board of Trustees Plant Committee Chair, Peter Brest, “Who among us knows one individual who can design a ground-breaking composting system, supervise the planning and construction of a complex performing arts center, achieve a state-recognized forest preservation system and personally repair a tent platform? I think I speak for all the present and past members of the Board’s Plant Committee when I say that it has been an incredible honor and privilege to partner with John on so much critical work over the past decades. We will miss him tremendously.”

We wish John the very best as he ventures into his new initiative, Compost for Good, helping individuals, organizations, and communities upcycle their organic materials, both in the Adirondacks and around the world.